-We had a trail Friday night, hosted by the lovely Charm City H3. The hares were I’m Tho Thor, Just Angie, and Old Faithful, and while the majority of us stayed back because, well,

a handful of wankers left the comfortable drunken arms of the hashpitality and braved the rain for war games and beach beers. A gold star for you, you hash overachievers!

-Post trail shenanigans were had in the hashpitality suite, where the Iron Bartender Competition, pajama party, and drunk yoga took place! The winner of the 2014 Iron Bartender competition was The Ben Franklin Mob (and their illustrious protective penis cups), and the loser was definitely 10 Dixxx with Wings! for trying to cause liver failure in one fell swallow. The winner of the Pajama Party would probably be After School Delight for dressing like the X-Rated version of Rainbow Brite (Shameblow Brite?), and the winner of drunk yoga was definitely Massage A Twat, mainly because she was the only one competing. By the end of the night, we all looked like this (especially Dial F):

-We had many, many visitors, and were even temporarily occupied by the Ben Franklin Mob, like when your crazy creeper uncle comes to visit and your parents are too nice to tell him to get lost.

-We had one virgin, Just York, who has amazing hair and lives in West- By Gawd- Virginia.

-Saturday night pub-crawl made two pitstops; the American Legion (would you like some dinner with your karaoke?) and Seaaacretttts! which resulted in a lot of this:

With a post-Seaaacrettts dance party that looked a lot like this:

I’d like to take the time to thank the wankers dumb enough to take responsibility for planning this shitshow of epic proportions: Can’t Find Pussy In A Haystack, Colliteral Damage, Rape & Spillage, Snatch Shot, and Legggs Over Easy. Tragic Carpet Ride couldn’t have gotten laid without you. And, as always, a shout out to Boardwalk Madame and her crew over at Castle in the Sand for taking care of us once again. We’ll keep our pants on for you in public areas anytime.

Assuming you had as much fun as I did at WIE, you probably don’t remember that much besides your wicked hangover and doughnut-cravings sunday morning. Well, with our powers combined, your current and previous EWH3 Scribes (except Little Thunder Clap, who, once again, failed to deliver) were able to pull together a list of WIEkend highlights:

40 Things You Missed/Probably Forgot At WIE!

We opened with lost items; Uncle Bad Touch lost his mug, found it in a block of ice. RG3Some lost her necklace, found it in Dr. Toolittle’s boobs. I’d call that last one a win-win!

2. Wank Like an Egyptian felt sick and decided to go outside to try and puke. He remembered “sticking his finger down his throat” but was still unable to puke.  Coincidentally he is now up to date on his prostate exam.

4. Apparently when Blows a Tranny gets really drunk, he reenacts entire scenes from Dirty Dancing. By himself.

5. S&MOM was overheard saying “my sofa pulls out but I do not”

6. Tragic Carpet Ride was found projectile vomiting in the bathroom, but staying true to his outfit, managed to just cover the stall in marshmallow fluff (Remember kids, he “Stays Puft” for allllll the ladiesssss, specifically, the ones that hang out at the OC American Legion).

7.  Dial F for Faggot, while inebriated, crawled into the bed of a female hasher and her boyfriend, and tried initiating coitis.  Shocked by the advances, the female hasher confronted Dial F, at which point he soothed her fears by gently pressing his finger to her lips saying “shhhhhhhhhhhhh… just let it happen.”

8. Tax Poop Hole was in dad mode all night, which was a huge downer for all the other guys because those of us harriettes with daddy issues (ahem everyone)  perked right up!

10. Groundhog Lay was offering his scepter to willing harriettes, stating, “come and take a ride on my disco stick.” After he held it out to Mr. hEd, it broke in half. That’s a bad omen my friend.

11. Tapped Three Times looked exceptionally dismayed while pouring his shots for the Iron Bartender Competition. When 3, 2, 1, Fuck Off! was asked what was wrong, he responded, “Oh no, he’s not upset, his face just looks like that.” #chronicbitchface

12. Yule Log was violated for letting Cock Soup get more drunk than him, while all Cock Soup wanted to do was enact his favorite scene from Pitch Perfect:

13. More Men Pukes Tonight totally lived up to his name by puking into his hands in the hashpitality suite before Saturday trail. I wasn’t there but I was told it looked something like this:

14. There’s A Clap For That, the inventor of Wreath Bingo, was violated for creating a game that nobody wins at and everybody seriously loses.

15. While waiting for trail to begin, Rear Protein Injection kindly shared the history behind the “Murkin” – a pubic hair wig developed by British prostitutes in the early 1800s.  Seeing the surprise on everyone’s faces, RPI proclaimed that he was a “vesicle of useless knowledge.”  From what we know about his name, we can safely assume he is a vesicle of many other things as well.

16. When Cock Soup woke up, he shoved a five hour energy in Wank Like an Egyptian’s mouth, proving once again that in the morning he can’t get anything up.

17. RG3Some was overheard saying “eh. I think that’s a little too thick…” No such thing, you just need more lube!

18. Before heading out to hare BB trail, Twinkle, Twinkle, Little Cock was heard exclaiming, “theoretically, if I sucked cock, I’d be realllllly good at it.” Theoretically?

20. Oh, AIDS was showing off his feminine side on trail by waxing nostalgic about his favorite scenes from Garden State. I’m just going to assume it was this one:

21. Mr. hEd, at the beer check, was walking around confused, saying, “well, I had pants…”  According to reports, the pants were last seen along with hEd’s virginity back in 2003, behind the Chuckie Cheese.

22. Colliteral Damage showed off her parenting skills by losing her doll “Baby Snatch Shot” on trail.  OCPS is still investigating, as Ms. Damage has yet to be able to explain how her baby doll ended up in the dumpster after only two beers and a shot of MD2020.

23. Everybody on walkers’ trail was violated for not being able to make it to beer check without stopping for a snack.

24. Wank Like an Egyptian was creeping on a little girl during the bus ride back to the hotel. Careful, Wank, that’s Uncle Bad Touch’s territory!

26. I’m tho Thor was heard on trail saying “have you never shit yourself? You gotta pop that cherry sometime…” Channeling his inner Yule Log, no doubt! 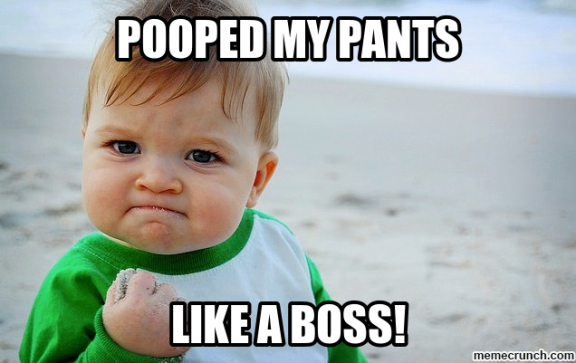 27. She Has Small Hands confessed on the bus that she was not very good at pole dancing. I’m Tho Thor proceeded to offer sage advice, directing her to “keep moving up and down the pole, until you feel comfortable.”  Preach on brother!!!

28. After School Delight was not at all upset when she face planted into a particularly nasty bog because she “Always wanted to know what it was like to be covered in shit.”

30. Known FRB, former Rear End Loader Winner, and Ball Buster Hare, Whiskey Business, was caught driving a car on trail (not even a bike or, let’s be honest, rollerblades). In related, equally as strange news, Whiskey was also sober, which I heard could have very negative effects on his health:

31. Ball Buster Hares wanted to try something different, so they drove all the way for Kansas for the ball buster trail. 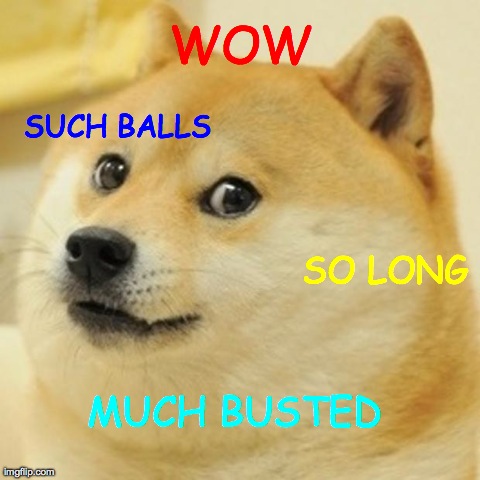 32. Red Vag of Courage was caught looking down at her vag with a look of disappointment saying “It needs to be tight.” (It’s modern times RVoC now there are surgeries that can help you.)

33. Some Just described Yule Log and Miss Me Gag Me as a hash “Power Couple”… the more accurate moniker would be “PowerHour Couple.” That is, until Yule Log is sticking his fingers in someone’s nose or stumbling precariously close to the bonfire.

Supposedly, in circle…
34. Turns out that Tax Poop Hole hates his name because it has the word “poop” in it. So, abiding by his request to have it changed, we renamed him Mr. Poopy McPooperson!

35. Oh, AIDS was also displeased with his name, and since we were feeling especially generous, we called him in to rid him of his shame (is that even possible?). Unfortunately, Oh, AIDS didn’t have any good stories that we could possibly pry out of him, causing us to rename him “Obviously He has An Interesting Damn-good Story!” (O.H. A.I.D.S! for short) that we will never be blessed to hear. You had one job, A.I.D.S.!, one job….

37. We finally found someone interesting: Just Dan. Just Dan is from South Philly, went to Rutgers, and loves doing Science-y things. He  loves MILFs , frequents music festivals while tripping on acid, and fists/gets fisted diligently and often. Some of the names that didn’t suck were You Put Your Right Hand In, Edward Fisterhands, and Fist Pump!. The crowd mumbled incoherently and henceforth and forever more, Just Dan will be known as Fist Pump!

38. Next we called Just Leslie into the circle. Just Leslie from LSU is a 4’9” ER Nurse who loves leprechauns, mandingos (hayyy Denzel), and going down on men when they’re passed out/legally declared dead. Some of the names thrown out there were Nurse Jack Me, Lollicock Guild, and Necrophiliblack. The not-quite-passed-out crowd voted and Just Leslie will forever be known as Necrophiliblack.

39. Since we seemed to get the naming ball on a roll, we decided to throw in one last Just: Just Alex. Just Alex is an EMT from NW Indiana and attended the University of St. Francis. She was caught having sex by her roommates once, who decided to shame her by playing “I Just Had Sex” really loud over the stereo. She dyes her hair, and no, the carpets do not match the drapes, and once gave a BJ after brushing her teeth, causing a burning sensation on her boyfriend’s dick. Some of the name suggestions were Red Alert, Minty Fresh, and Fantastic Floor. The group voted, and henceforth and forevermore, in the world of hashing (except Great Falls!), Just Alex will be known as Fantastic Floor.

40. Last but not least, we had our Rear End Loader competition. The top three competitors were Wank Like an Egyptian, for bumbling around like this

And Can’t Find Pussy in a Drunkstack, for, well, being himself.