100 trails older and none-the-wiser, EWH3 again got shiggy with it in the wilds of Southern Maryland!

And while a lot of noteworthy things happened in history between the years 800 and 900–gunpowder, Vikings, paper, and eunuchs (http://www.fsmitha.com/time/ce09.htm) (Note: more on eunuchs later), EWH3 has contributed absolutely nothing to the advancement of civilization since its 800th. In fact, I’m sure we’ve set it backwards.

But, before we launch into another century, let’s take a look back at some of the lowlights of the last 100 trails! 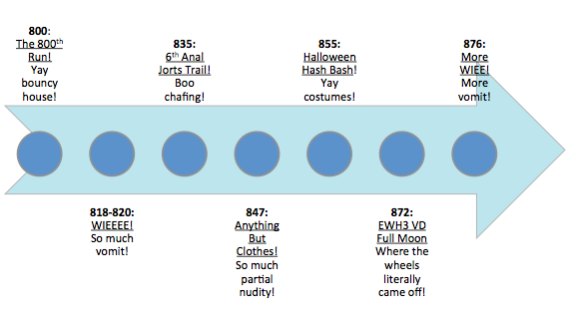 The trail was… um… let’s just say we can go ahead and reset the “Number of Trails without a Scribe Injury” counter to zero. Shiggy, horse shit, and hornets a-plenty. Did I mention the hornets? Yeah, the hares led us through at least three nests. I guess that’s what it takes to make old-timey hashers swell up these days.

After some minor cleaning up and some major Benadryl-ling, O-G EWH3 hasher Rear Protein Injection held court. We stuffed ourselves with fish and pork, and the oft’ absent songmeister Jew-cock-a composed a few special numbers for the occasion. They were, um, forgettable.

What will live on in history, though, are the records of VIOLATIONS!! (documented as well by Ms. Mambo # Hives)

But, best of all, we had some very special NAMINGS!!!

Just Beer Van hails from Craigslist where s/he was among the least sketchy cash-up-front purchases. His most embarrassing moment explains my confusion in pronouns, because after some aggressive fondling by a teenager, his first fabulous pair of big, blue truck nutz were sadly removed. Following the neutering, Just Beer Van lived briefly as a female, post-op vansgender, until the street harassment proved too much and he reclaimed (and more properly secured) his balls. JBV’s first time was noteworthy, too, as he was prematurely tag-teamed into service by an injured Plan B. Lots of great names were suggested including Trans-emission, Van-sectomy, and the stately Martin Van BeerRun, but because he lost his nutz and they were resurrected, Just Beer Van shall henceforth be known as Scrotal Recall!

Dr. Toolittle wept with pride. And speaking of a parent’s tears…

After the pack of drunks departed and sang-shouted every conceivable, nauseating verse of “Jesus Can’t Go Hashing,” “Yogi Bear,” and “I Used to Work in Chicago,” there was another very special naming!!

Just Maddie, ten-year-old D. A. U. G. H. T. E. R. of D. A. D. S. is more than just a ringer at Kubb. She’s an avid and advanced reader, preferring super downer books like Letters from Rifka about escaping the Russian Civil War, and a star of the stage (and likely soon the screen), after her lead roles in The Sound of Music and The Wizard of Oz. She has great taste in movies, too, including Lilo and Stitch and Inside Out. More than any of these, though, Just Maddie enjoys teasing her dad, because every single one of these things makes him cry. A few names were suggested including “I Make Daddy Cry,” and “Daddy Tissues,” but because she has a flair for the dramatic and a passion for the miserable and tearful, Just Maddie shall be known as Les Mis Junior!!

And, a little math tells me Les Mis Junior will be of age in time for EWH3’s 1300th run! Start planning now, St. Paulie’s Girl and Dr. Toolittle!