*Spelled as advertised. I reports it as I sees it, folks.

It seams everyone’s been pairing off lately. Taking their mom’s advice, jorts are really putting themselves out there. Will this dating profile work? Only one way to find out; let’s let ‘er rip! 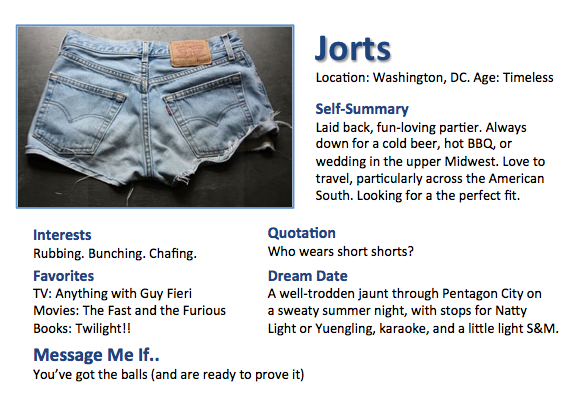 Levi it to me to go straight to the puns.
The Deets:

I’ll cut right to the chafe—

The hares displayed zero creativity this week and Rear Protein Injection conducted circle. While no crimes of fashion were committed, there were of course…

And if that wasn’t enough excitement, we welcomed another hasher to our den…im. There was a NAMING!

Just Lawrence is an electrical engineer from Connecticut who designs algorithms that are out of this world! While not having sex with a hot woman who feared his hormonal releases, he busied himself in college by watching Jurassic Park every. single. weekend. For four years. He once maliciously replaced soda with milk, and this badass spirit earned him sex at the #1 strip club in the Northeast. A bunch dinosaur-themed names were suggested including Fapasaurus, Stega-sore-ass, and Jur-ass-ic Pork, but because most of his sexual encounters seemed to come with a recommendation and reviews by previous users, henceforth Just Lawrence shall be known as Craigsfist!

And with that, the pack ran off and became reacquainted with our old buddy Freddie! We sang to our little hearts’ content and spanked the living shit out of Twinkle because he had the nerve (endings) to declare it was his birthday. ‘Twas A very merry unbirthday, indeed.

On- Jorts Illustrated Skinsuit Edition -On
Red, White, and Poo