Glitty Clitty Gang Bang and S&MOM are a colorful couple to say the least, and white dresses would simply never suffice. Searching for a gift to help them celebrate? Look no further than their registry: 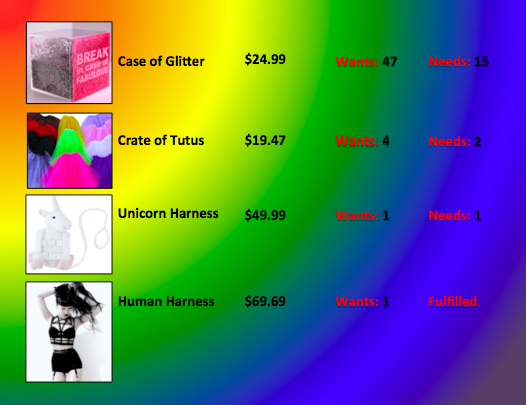 The hares led the brightly colored pack through Rock Creek Park and the sparkliest parts of the upper Northwest. Glitter was plentiful, but flour was hard to come by.

Fortunately, some strippers arrived in time for end circle. Unfortunately, they were the wrong kind, so we set off to the bar, staked out a little corner, and Kindergarten Cock conducted a rare EWH3 indoor circle.

Aside from the failure of these strippers to get naked, there were some other: VIOLATIONS!!

Since we were in a bar where pouring beer over shirtless people generally frowned upon, there was no naming. We continued drinking, toasted the happy couple, and put our boobs on the pool tables since other body parts were prohibited!