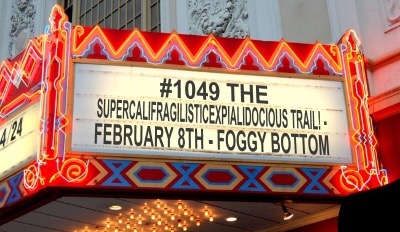 With Special Appearance By (Our Transplant): Just Alan

Another trail, another movie I haven’t seen. I’m sure I can make this work, though.

Mary Poppins (1964)  follows a young woman, who is most definitely a witch of some sort, as she forays into the wild world of an au pair. Her two mischievous (and possibly diabetic?) charges feel they have a strained relationship with their father.

Desperate for a strong male influence, they turn to Bert, a Cockney chimney sweep (played by Dick Van Dyke, of course), to fill that role.
After a rousing musical number involving dancing penguins goes awry, Mary is forced into exile, leaving only the children’s parents to care for them.

Yeah, that can’t be right.

Let’s revisit our friends at IMdB, to find out:
What exactly is so poppin’ about Mary?

“Its old-fashioned charm is timeless.” – Atreyu_II

“Great dancing sequences, and especially those gorgeous songs (each one of them great).” –gue_gg_ila

I don’t seem to recall much dancing on trail, although I had better things to focus on.

“What won me over was the ending.” – Spleen

“Anarchy in a sensible package.” – Quentintarantado

The Hares were violated for failing to mark their false trails. This isn’t the first time they’ve ended all this foreplay with such a let down.

Speaking of letting people down, A Midsemester Night’s Cream didn’t service her virgin tonight. Despite my offer to compensate anyone who could right her wrong, it appears that no one was able to deliver.

Otto Von Jizzmark was spotted at beer check wearing a space blanket, similar to this:

It was also brought to my attention that he will be missing this year’s WIE festivities to participate in a marathon. Does that make him a Space Race-ist?

(I shouldn’t admit this, but I will. I actually didn’t even get that joke at first…)

Texas Hold Him and Wait, Wait, Don’t Fuck Me were violated for sharing their encyclopedic knowledge of STD’s. It’s not surprising. After all, experience is the best teacher.

End Credits:
Are you interested in haring a trail,but lacking inspiration? Here are ten more movies that I haven’t seen:

After the credits, there’s always a bonus scene. This week was no different.

The Naming of Just Nobanza

One fateful November day in 2011 (the 16th to be precise), Just Nobanza arrived in the States, all the way from Cameroon. Fast forward to 2014 and he found himself wishing he were as happy as the people at the Rhode Island Metro Station. That quest led him to hashing. He’s quite fond of guavas, and pooping in metro stations. Despite having no idea what a boner is, he sure has gotten a lot of them. Once while eating spicy fish (and later spicing some fish tacos), and another time while attempting to entice a woman in an avocado tree to take off her panties. He’s generally pretty quiet during sex, but would get vocal for Belle or women named Linda in guava trees. Despite the pack’s fixation on guavas (how many times can I use the word guava before it gets weird? Guava.) and contenders such as Belle of the Ball Sack and Boner? I Hardly Know Her!, it was ultimately Sham Rock Your Cock who re-purposed Just Nobanza’s own quote to name him: What’s a Boner?

On – Was the guava better than the sex? – On
Poon-apple Juice