Beer! It’s our favorite beverage, but how do you choose the right one? Take our quiz below to find out! 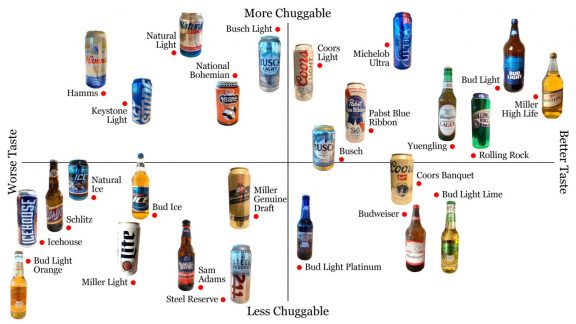 Tally up your responses and read below to find out your beer-it animal.

Mostly A’s: A fun loving pilsner! You’re bright and effervescent, with a crisp wit and a bit of lightheartedness. Go on and grab yourself a nice pils – wait.. the brew crew only brought Bud Heavy? Guess that’s what you’re drinking.

Mostly B’s: A Red Ale! A little sweet and usually a bit toasted, you like to keep to the sidelines and enjoy life as a spectator. You deserve a malty red during circle. Brew crew, get this wanker a – oh.. there’s only Bud Heavy. Sure, that works too.

Mostly C’s: An Aggressive IPA! You have taste, but like to take things seriously. A little bitter, but that doesn’t take away from your charm. Ask the brew crew for an IPA to quench your – right.. Bud Heavy.. Got it.

Our RA, Schrodinger’s Cock was violated for bringing all the water, but none of the barley, yeast, or hops.

Sir Lance-a-Little had fun playing dress up, using his mask to give the appearance of both beauty AND brains.

Despite the super clear d’erections, Just Alex couldn’t find start. If he’s this lost before trail, I can’t imagine what else is alluding him.

The Cumburglar stuck his hands where they don’t belong, proving that he, too, needs more specific instruction.

9021-ho took it slow as he poured his beer… right into a brand new shoe.

When what to my wandering eyes did appear, but a very solemn occasion…

The Naming of Just Kirsten

Despite the fact that she isn’t quite sure how to drink beer, Just Kirsten has made it to 30 trails at Everyday is Wednesday. This is almost ten more than the number of teeth in her possession mouth. No stranger to doing the most, JK has fucked across the entirety of the Virginia Tech campus, earning her a triple crown, a broken finger, and a deep distrust of uncircumcised penises. Just Kirsten learned to read in third grade, which explains why she ignores so many warning signs. A true Black-out Cat with a love of yarn, Just Kirsten always lands on her feet, even when falling from a bar balcony. Way too many names were nominated, but in the end it was your lovely stunt scribe Poon-apple Juice who christened her…

Soggy and jubilent, we dispersed to our homes for beer, beer, and more beer (but this time with less bugs and drier butts)..