Not quite ready to hang up my scribe pen yet, so here is the final hash trash for your 2015 Mismanagement:

When: Thursday January 14, 2015
Where: U Street (Green, Yellow lines)
On After: Town Tavern
Hares: Sorest Rump, Tuck Tuck Deuce, Dr. Toolittle, GeriatricMandering
Visitors: Trailer Park Tragedy, Wobble Whip It
Virgins: there were a lot of you, and I was more focused on drinking than noting your names. Welcome!

And your final violations for this hash year:

On – thanks for the memories – on,

Ever wonder what it would be like if E-Dub’s exploits made it to the small screen? Now’s your chance courtesy of this week’s stunt scribe, Texas Hold Him. So …

So join us here each week my friends,
You’re sure to get a smile
From several drunken castaways
Here on EH3 Isle!

On the latest episode of EH3 Isle:

Two new ingénues made their appearances. Hopefully we see them in future episodes.

We didn’t see any cross-over extras, which is okay because they try to make references no one else gets.

In our first act, Maybe It’s Gaybelline was overheard asking General’s Farm Animal what kind of booty he was looking for. With the amount of grog he consumed, it he was probably okay with any port in the storm. Red White and Poo’s lines about being “itchy, itchy all over” were not that surprising, considering where there are mermaids, there are crabs.

After a commercial break, La Gingeracha mentioned that he was considering becoming a monk. Since all they do is pray and not have sex, he is already half way there. GeriatricMandering revealed a bit backstory by admitting that whiskey and lemon tasted like cough syrup. If they do a daddy-issues arc, I’m going to bail.

I found the A Plot to be meandering and slow to resolution, but the B Plot left a lot to be desired. The hares probably agreed, since they bailed on this narrative for second half and left Return to Sender’s Wife to lead the way.

In the finale act Just David delighted with many entertaining bon mots. Though he may have the soaring oratory of an NPR anchor, that silver tongue of his was not enough to reel in his first love, earning his character the name Wait Wait, Don’t Fuck Me.

So join your faithful recapper here each week.

Another week and EWH3 is yet another step closer to just opening up our own wedding chapel. As we celebrate Unobtainium’s upcoming nuptials, we took some time to populate the potpourri table of wedding guests that is always the last to use the buffet line.

And of course there was a motley crew who just stayed at the bar the whole time, telling stories, like that one time …

But at the EWH3 Wedding Express, we have a different kind of solemn occasion where someone gets a new name and a piece of jewelry.

On After: Irish Channel

Apparently the following happened because I wrote it down:

We also held a solemn occasion for Just John. He went to University of Marylander to make maps but now just follows bike routes. Who cares about his day job when he spoke about getting a shampoo bottle stuck up his ass for pleasure. It was expunged thanks to laxatives. While A Bicycle Built For Poo would be a great addition to the poo family tree, please welcome instead Maybe It’s Gay-Belline.

The U.S. was famously built upon the tenants of life, liberty and the pursuit of happiness, while D.C. was infamously built on top of a swamp. This week, we went the infamous route (naturally) and continued our tour of local marshes, waterways and shiggy.

Members of our pack found out they could have a second career as B-movie monsters: be it our virgins — Justs Adam, Christine, Emily, Garrett, Kristi, Mariana, and Mark — starring as Creature from the Black Lagoon — or our visitors — Condom Style, Dances With Balls and Lips — starring as Swamp Thing.

But just like every week, some folks found themselves simply listed as the extra in the credits as “Stupid Person 1” —

On After: Cleveland Park Bar & Grill

It’s the dog days of summer, so this week we are keeping it simple. (Just like the rules of the beer mile.) We explored the hills and valleys and avenues west of the Rock Creek and people did some stupid stuff, including:

And we held a very solemn occasion for Just Lauren. It was fitting that her brother joined us because he was surely dying to hear about the time she was hooking up with a guy only to have his brother — who she also hooked up with — walk in on them. But the crowd wanted to know more and more about the New York Giant she slept with. Was he linebacker like Dick Butt-Kiss? All in all, we still couldn’t get over connecting the dots of familial relations, so please welcome Six Degrees of Penetration.

On After: Cornerstone Grill and Loft

Start up the DeLorean, strike up some Huey Lewis and strap on your hover board, we’re going to Hill Valley.

And just like Biff driving into the manure truck, these people took some shit on trail:

And just like the Enchantment Under the Sea Dance, we had a very solemn occasion. Before she heads overseas to continue her teaching experience, we got to know a little more about Just Elise. Fitting for the evening’s location, she is a Maryland Terrapin even down to her shoes and her stories kept in theme, too. There was the time security interrupted her having sex in a campus fountain but only after they were watching for a quite a while. Or the time that when meeting a stranger at spring break and almost getting arrested while giving head turns out to be your new work study colleague. But perhaps most importantly, she spent time in a collegiate a cappella group so circle up aca-bitches and welcome, Blow-Re-Mi.

On After: Molly Malone’s

With summer tourist season reaching its peak of freshness, your fellow hashers decided to stink up the place a bit with a tour of the National Mall and Capitol Hill.

While some of us are bonafide locals, others still have a way to go, including:

And these guys who said or did stupider shit than saying their flight was out of Ronal Reagan airport or standing on the left side of an escalator:

We also took some time to celebrate a very solemn occasion for Just Francisco; an actual Washingtonian who used to hose off hash marks from his driveway in Arlington as a kid. He is a geographer and DJ and professional frisbee player who likes talking  about his ass. He lost his virginity doggy style on a ski trip in Canada. A cleaning lady once saw him cleaning his hairy ass after sharting at work. He came on a girl’s chest on a baseball field during a school dance and still feels bad about it.

Saying whatever to presidential motorcades,

The NoVa of 2015 can sometimes get a bad rap (or a funny one). But this week — as we celebrated this nation’s 239th independence day — we flashed back to the wilds of Rosslyn during that monumental year of 1776. And just like the signers of the Declaration of Independence, we topped it all off with a lot of booze. 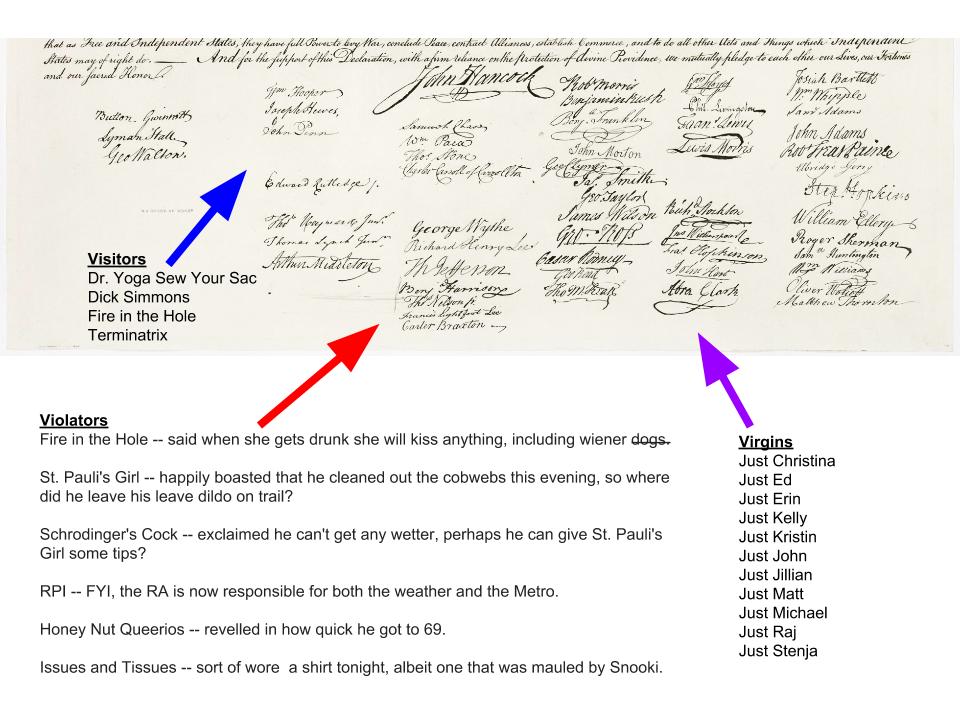 And we welcomed back Just Caroline for part two of her very special occasion. She is an early childhood educator who makes her class watch YouTube videos when she’s hungover and went through a slut phase in college. There was the two-part, two-year long act of losing her virginity. The time she blacked out, went to the diner for drunk food and then to the hospital for stitches. And who could forgot shitting her pants while drinking and watching Old School during a hurricane, which ended with her friends throwing her in the shower. For these reasons and some more, please welcome Head Shart.

On After: The Big Stick

Weather: It’s getting hot in herre. 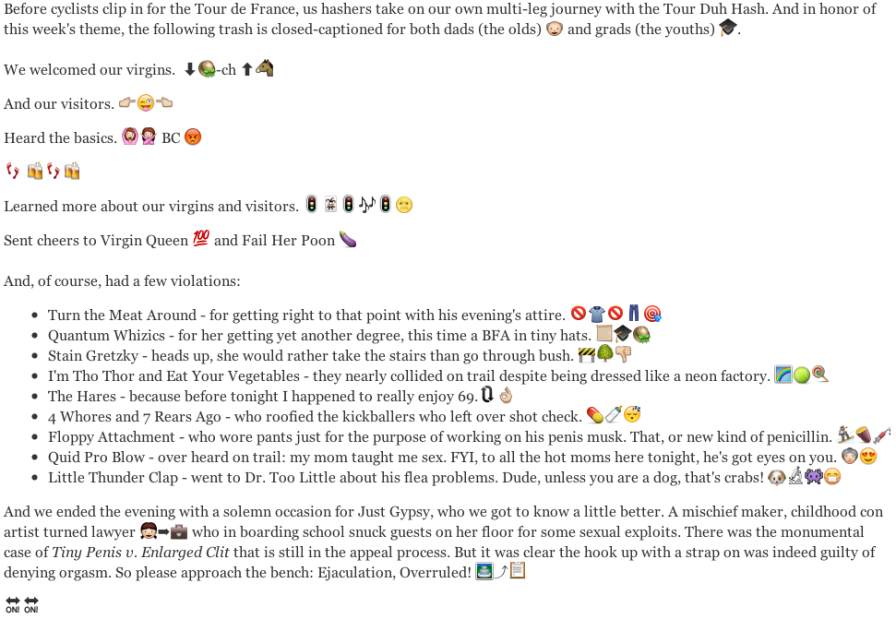